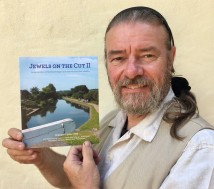 Jewels on the Cut II, an exploration of the Stourbridge Canal and the local glass industry.
This latest addition to Graham’s ‘Jewels’ series that covers the glass industry and the canal that runs
through it is the result of a seven-year upgrade since publication of the original in 2010. In view of its
dual nature it unusually carries two forewords, one by Peter Mathews CMG of the Canal & River Trust
and the other by Graham Knowles of the British Glass Foundation.
The second edition reflects what Graham describes as the ‘monumental changes’ that have taken place
since 2010, not least the formation of the Canal & River Trust and the creation of a brand new glass
museum alongside the canal at Wordsley.
Graham Fisher says: ‘Jewels on the Cut II is a major review that not only brings developments up todate but also offers clear indications that the canal and the local glass industry, both once under threatof being lost forever, have a bright future.’
JOC II will be officially launched at 11:00am on Friday 25th August in the Lehr Theatre, Ruskin Glass
Centre, Amblecote Road as part of the International Festival of Glass (IFoG) celebrations. This will be
followed at 1:00pm by a guided walk along the canal towpath from the Bonded Warebouse in Canal
Street to the new White House Cone museum of glass in Wordsley.
This will be Graham’s fourth book launch at four successive IFoGs, an achievement that is understood
to be unprecedented.
JOC II retails at £15.00 but for the official launch at The International Festival of Glass it will be available at a special rate of £10:00,
with proceeds from the day going to the British Glass Foundation.
Places on the guided walk can be booked through the Ruskin website at www.rmlt.org.uk/Event/graham-fisher-jewels-on-the-cut-book-launch-and-canal-path-tour-places-available